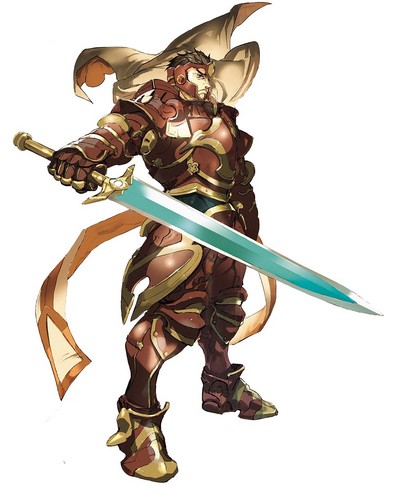 The cold night wind whistled past him.

It stirred up Brain Unglaus’ hair and set his clothes fluttering as well.

The wind scattered his pale white breath and his mumbling, carrying them into the distance.

Even the deepest parts of his body felt like they were frozen.

Brain was alone atop the walls of E-Rantel, where the three of them had been before they had moved out.

There was nothing here except darkness.

Many of the Kingdom’s people had lost their lives during the battle― no, the massacre of the Katze Plains.

He remembered what he saw when he crawled off that battlefield.

The defeated people dragged their feet lifelessly, their clothes were tattered and they looked utterly wretched.

Even though Brain was a warrior who trod the edge of life and death on a regular basis, the image of that hellscape ―created by a single magic caster― remained seared into his eyes.

Even E-Rantel ―protected by its city walls― could not be considered a safe place by any means. However, the soldiers who had fled here were utterly exhausted and they collapsed like puppets whose strings had been cut.

Then, he looked silently to the sky.

Brain looked at his hands.

Even now, the weight from when he had carried the lifeless lump of meat that was that man’s body remained in them. Try as he might, he could not forget it.

He was a great man, and a rival who had always been a step ahead.

The death of that man — Gazef Stronoff — filled him with a profound sense of loss.

What Gazef meant to Brain could not simply be summed up by the word “rival”.

Brain had become the man he was now because Gazef had fought him during the martial tournament, because he had soundly defeated Brain and his ever-growing pride, because he had ignited Brain’s burning desire to defeat Gazef.

Brain Unglaus had lived, grown and refined himself because of Gazef. The strength of the man called Gazef was enough for Brain to invest his life into surpassing it. It was just like how a son had to surpass the barrier he called his father.

However, the person he should have surpassed no longer existed.

RIght until the end, Gazef had loomed tall before him until he passed into death.

Brain had once seen the true meaning of power in the form of Shalltear Bloodfallen. So for a time, he had fallen and could not rise.

He had relied on his strength as the basis of his confidence, so when his strength had been broken, the rest of him proved unexpectedly fragile. The Brain who stood here now could admit that.

However, Gazef had been different.

“Ainz Ooal Gown must surely be a monster of the same caliber as Shalltear Bloodfallen. And yet Gazef stepped forward to confront him anyway.”

At that time, Gazef did not request the duel for a worthless reason like his own survival. He must have had a completely different motivation than Brain, who had flailed his sword at Shalltear while on the verge of tears.

What on earth had made him do that?

“I don’t understand. Why didn’t you run?”

Forcing the words out was like coughing up blood.

“Why did you choose to die? That monster said he’d have let you go, no? Shouldn’t you have conserved your strength to challenge him later? Why did you do it?! If you had to die, I wanted to go with you!”

If he could not surpass Gazef, then Brain wanted to die with him.

Brain turned his vision to the weapon at his waist.

It was Razor Edge, which he had been temporarily allowed to carry.

This was the technique Gazef used to defeat Brain in the martial tournament.

Four arcs of light cleaved the nearby railing to pieces. There was virtually no resistance and the blade flowed through the metal like it was water.

“I learned this because of  you… I admired you… I wanted to die with you. Why wouldn’t you let me fight by your side? Why didn’t you tell me that I could die with you!”

His eyes were hot, but the tears did not flow.

Just then, the sound of footsteps reached Brain’s ears. Only one person would come here.

“I hear men cry more easily when they get older. I guess that’s true.”

“I think the pain of losing someone precious to you has nothing to do with age.”

It was the hoarse voice he expected.

“…Forgive me, Climb-kun. In the end, I left everything to you.”

Brain rubbed his eyes, and sheathed his sword. He turned and saw Climb, wearing his armor with a puzzled expression on his face.

“However…well, even if I was there, it would have been useless, right? Under these circumstances, nobody’s going to try and kill the King. Tell me, what happened after that?”

“Yes. Prince Barbro hasn’t returned yet, so they decided to send out a search party for him tomorrow.”

And because they could not spare enough soldiers for this duty, they were planning to use adventurers instead.

“After that, there was the matter of ceding E-Rantel ― it was a unanimous decision. All the nobles approved. Even the King agreed.”

Even the nobles of the Royal faction had approved.

During the demonic disturbance, the power of the Royal faction had grown. Although this increase in power meant that they could mobilize the vast army they had sent to the Katze Plains, it also meant that the grievous losses they suffered there would had massive repercussions. And if they gave away E-Rantel, which was directly administered by the Crown, then only the royal family would lose out. They probably though that since this was the case, they might as well do it, since it was the only way for them to survive.

This time round, the Royal faction had been severely weakened, while the Noble faction had grown stronger.

What would all of this mean for the future?

Suddenly, he realised that Climb’s body was trembling

He was not shaking anger from anger, but fear. Remembering the horrific sights from back then must have set his broken soul screaming. That absolute despair was probably drawing close to him.

“…Even now, I get frightened when I think about them.”

Perhaps it was something like a strength born of desperation.

In his memories, he recalled how Climb stood with him in preparation to battle the Sorcerer King. Maybe he knows the answer, he thought.

“Hey, tell me something. Why did Gazef ask for the duel?”

Climb’s face was a picture of surprise. Just as Brain wondered if he had not been clear enough and prepared to clarify his question, Climb answered him.

“This is just my personal opinion, is that all right?”

“…Could it be that he wanted to show it to us?”

“The power of the Sorcerer King, Ainz Ooal Gown. And then… he must have wanted to give us a future.”

“Yes. It was so that we’ll have some tactics and information in case we have to do battle with him in future.”

It hit him like a bolt from the blue.

There could be no other answer. Climb was right.

That man had bet his life in order to squeeze out what little information he could for them. Although, he did not think that the Sorcerer King, as a magic caster, would willingly enter melee combat again without bodyguards by his side. Even so, he had staked his life on the miraculous chance that it might happen again. Then, who would he entrust with that possibility?

Brain laughed at himself. I never even thought that might be the case.

In that case… how would he live on, now that he knew what Gazef’s thoughts were?
As Brain lost himself in thought, Climb asked a question, as though he were unable to bear the silence.

“…If I’m not wrong, Stronoff-sama won’t allow himself to be resurrected?”

“Gazef was that kind of man.”

Even if they used resurrection magic, it did not necessarily mean the dead would come back to life. The legends said that people who were happy with their lives would refuse resurrection.

“The King does not seem to have accepted that yet.”

“That’s only to be expected. However, that guy won’t be back… Still, it’s quite a surprise.”

“Yes. I don’t understand what Gazef-sama was thinking. Shouldn’t he come back to life and continue pledging his loyalty? It’s what I would do.”

“Is that so? As for you, Climb, I think you would do that. As for me… don’t bring me back after I die. I don’t think… I’ve lived a life that I regret.”

“For my part, I would still choose to return. I want to grind this body to dust in service to Renner-sama… if I can afford to.”

Only one person in the Kingdom could use resurrection magic. There was no doubt the price she would ask would be staggering… but that was the rightful price of defying the grave.

During the demonic disturbance, all the adventurers technically belonged to the same team so there was an exception, but under normal circumstances, resurrection would cost a sizeable amount. It was a sum that would make one’s eyes pop out, and normal civilians or soldiers could work their whole lives and never be able to afford it. The same went for Climb.

Your Princess-sama would gladly pay up, Brain did not say. Instead, he replied, “Is that so?”

The silence descended on them again. This time, Brain broke it.

“I really wanted to defeat that guy…”

Climb did not answer. Brain did not expect him to either. No, if he thought about it rationally, these words meant nothing to Climb. However, he felt that he had to say the things piled up in his heart.

“I lost to him in the past. So I thought I wanted to beat him. But now, that’s impossible… Ah, I let him get away,” Brain said as he looked to the night sky. “Dammit…”

What should I do?

What should I do about Gazef’s will?

“No, it should be like this. What am I confused about? There’s only two choices. Carry it on, or don’t carry it on. I want to… win? Ah, is it like that?…”

In the end, isn’t there only one answer for me?

A savage smile bloomed on Brain’s face, and he raised Razor’s Edge to the sky.

“Hmph! Who the hell wants to carry on your will!”

Brain shouted loudly, from the bottom of his heart.

“You chose to die! How dare you take the easy way out! Go regret it in the afterlife! I ― I will, I will surpass you in my own way! Climb! Let’s go drink! Let’s get some wine and have some fun!”

He did not know what to do.

However, he knew that he did not want to simply inherit Gazef’s will. If he did that, then no matter what he did, he would never be able to beat him.

Besides, he would probably end up thinking about Gazef over and over again in the future. Therefore, he ought to forget him for a short while.
Brain reached out to grab Climb by the shoulder and pushed him forward. The weight on his hands lightened a little.