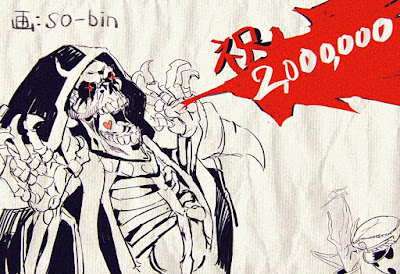 There was a slight change in the movement in the air before its nose, which woke the Dragon whose alias was the Platinum Dragon Lord — Tsaindorcus Vaision — from his light slumber.

What filled its  waking consciousness was the emotion of surprise. It would not have been a stretch to call it shock, even.

The keen sensory abilities of Dragons far exceeded those of humanity. Even if their foes concealed themselves or tried to deceive them with illusions, Dragons could instantly sense their opponents from far away, even when they were sound asleep.

As a Dragon Lord, his senses were more acute than that of the average Dragon. That being the case, anyone who could come this close to himself must be possessed of incredible abilities.

Even a long-lived being like himself only knew of a few beings with such abilities. First were its fellow Dragon Lords. Then, one of the Thirteen Heroes who was no longer in this world, the assassin Ijaniya. And then, there was—

As he sensed the person his mind was sketching, Tsaindorcus Vaision — Tsa, for short – quirked up the corner of its mouth and slowly opened its eyes.

To the eyes of a dragon, the darkest night was as the brightest day.

In front of the presence which he had sensed was an old human woman standing proudly, with a stylish by her waist. She had evaded his keen senses and come all the way here — a prankster’s smile spread over her age-wrinkled face.

Tsa did not answer, simply regarded the old lady.

Her head of white hair showed how long she had lived. However, her face overflowed with a childish vibrance on her face which did not match her years.

Age might have made her skinny and weak, but it had not changed her heart.

Tsa compared how she was now to how she had been in her memories. The old lady’s brows stood up, at a dangerous angle.

“What’s this? Can’t even spare a greeting for an old friend? Oh my, to think even Dragons could go senile.”

“Forgive me. Seeing an old friend moved me so much that I shuddered, so I was unable to speak for a moment.”

It was hard to believe that such a gentle voice could come from such a massive frame. In contrast, the old lady’s reply was exactly as Tsa had expected, full of sarcasm.

“Old friend? My old friend is that empty suit of armor over there… beaten up though it might be.”

In the past, Tsa had travelled with the old lady and her group by controlling an empty suit of armor as a substitute for himself. Therefore, when his true identity had come out, his companions had been furious about being tricked. The resentment from back then still had not died out, and she was still making digs at him until now.

On the one hand, he hoped that she would give him a break. On the other, he felt that being able to banter with an old friend like this was a joyous thing.

Their usual conversation brought a smile to Tsa’s face, and then it noticed the old lady’s finger.

“Hm? The ring seems to have vanished. Where did you put it? I recall nobody should be able to take anything from you… but that is a powerful magic item beyond the domain of humanity. I hope it hasn’t reached the hands of dangerous elements; particularly the Black Scripture of the Slaine Theocracy.”

“Trying to change the topic, are we? Still, your eyes are sharp; is that the Draconic treasure sense at work… oh well, that’s fine. I gave it to a young man. Don’t worry about it.”

That item was not something that could be simply given away.

It was a magic item made through the use of Wild Magic. The power of magic today was polluted and distorted, so making another such item was very difficult. As one of the rare few practitioners of Wild Magic, it wanted very much to ask her where exactly the ring had gone.

However, it trusted its friends implicitly.

“Really now. Well, since you decided to give it away, I doubt you’d have gone wrong… right, I heard that you were an adventurer once, am I correct? Are you here on business?”

“Of course not. I came to look up a friend to have fun. I’ve already retired, and I’m no longer an adventurer. Don’t ask a little old lady like me to work so hard; I’ve turned my duties over to that crybaby.”

Tsa thought for a while and then a flash of inspiration struck.

“You’re probably the only one who can call her little.”

“Oh, really? You’re even more qualified to call her little. I’m about the same age as that girl, but you ought to be older, right?”

“That is true… still, I can’t believe that girl would be willing to be an adventurer. What kind of scheme did you use?”

“Hmph. That crybaby went on and on and wouldn’t stop, so I said, ‘If I can beat you, then you’ll have to listen to me’, and then I smacked the crap out of her!”

The old lady went ”kakaka”. Her laughter seemed to come from the bottom of her heart.

“…I think you’re the only human who could beat that girl.”

Tsa sounded like it had broken out in a cold sweat, and shook its head. At the same time, it recalled another one of its old friends — one who had fought the Demon Gods by its side, who had performed great deeds in the battle against the Vermin Demon God.

“Well, I had friends helping me out. Besides, if you know the undead, you know how to beat the undead. If you can’t defeat the power of the Earth, you can still exploit elemental affinities and compatibilities to turn the tables in your favor. Crybaby is very strong, but others are stronger than her. For instance, you could easily beat that girl. If you didn’t limit yourself, you would be the most powerful being in this world.”

The old lady’s gaze shifted to the suit of  platinum armor. The old lady imagined she would have received a casual answer, but Tsa’s voice was grave.

“I don’t know about that. The power that pollutes the world might have started moving once more.”

There was a hole on the armor’s right pauldron, like it had been pierced by a lance.

“…Have the hundred-year aftershocks come? They aren’t on the side of this world like Leader was?”

“…It might have just been an unfortunate encounter, but I feel that Vampire was of an evil nature. Speaking of which, while I guessed that it would be about time, I don’t know if it’s good luck or bad that actually brought me into contact with someone who could verify the other side.”

“Pick whichever side of the coin you like. Oh yes, I’ve mentioned this before, but why not ask the other Dragon Lords for help?”

“The answer is still the same; it’s very difficult. After all, they’re all people who didn’t fight in the war with the Eight Greed Kings. For instance, I feel the Heavenly Dragon Lord — who only knows how to fly around in the sky — or the Deep Darkness Dragon Lord  — who hides in that massive underground cave doing who knows what — won’t possibly help us.”

“Really now. Aren’t there others like the Brightness Dragon Lord, Dragon Lords who had children with humanity? Try talking to them; who knows, things might turn out well, you know?”

“…Perhaps. But I personally feel that it would be better to wake up she who sleeps in the bottom-most levels of the city which floats upon the sea for help. You’d have better chances for success.”

“She’s ‘waiting in the land of dreams’, huh? If only we had preserved all of Leader’s knowledge, things would not be so troublesome. He died too young.”

“It can’t be helped. He… killed a comrade (Player) he had spent his journey with, and it got to him. I can understand why he’d decline the resurrection. Rigrit, you were shocked too, right?”

The old lady looked into the distance, and she slowly nodded with a pained expression on her face.

“Rigrit, I apologize for asking this of you even though you’re no longer an adventurer, but can I beg a favor of you?”

“What is it? I’ve got a pretty good idea, but I want to hear it from you.”

Tsa’s eyes went to a sword. The sword did not look suitable for slashing, but its edge was sharp beyond comparison. It was of a standard that modern magic could not possibly make.

This sword — one of the eight great weapons which the Eight Greed Kings left behind — was the reason why Tsa could not leave this place.
“I’ve been doing this until now, and I hope you can lend me a hand. I’d like you to collect information about magic items that can rival that sword over there… that can rival Guild Weapons. Or perhaps, special items from YGGDRASIL like the strengthened armor which Red Drop — adamantite-ranked adventurers of the Kingdom — possesses.”