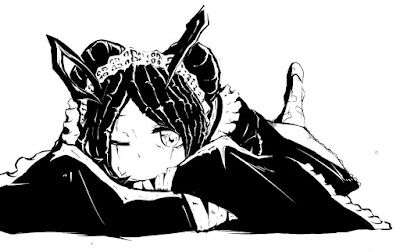 There was a room which was the very definition of “spectacular luxury”.

The bright red carpet on the floor was so soft that it made people feel that their calves were sinking into it. The high-backed chairs were made of high-grade natural lumber and carved with intricate rococo designs, The cushions gleamed with the lustre that only genuine black leather could produce.

A man lounged atop the chair, sinking into its back as he extended a pair of long, slender legs before him.

Noble. If someone were to perfectly capture his appearance in a portrait, that was how they would describe him.

His blond hair reflected the light of the surrounding magic lamps, producing an effect like the radiance of a galaxy. The dark purple pupils within his narrow-slitted eyes were like amethysts, enthralling all who looked into them.

However, anyone who laid eyes upon him would probably have a different impression of him before they praised his noble appearance. Wholly separate from his looks, anyone who personally experienced the presence he radiated — the natural air of a born leader — would only be able to form one impression of him.

That was to say, they would think of him as a “ruler”.

At the tender age of 22, he was the reigning Emperor of the Baharuth Empire. The nobles regarded him with respect and fear, while the people were filled with the utmost respect and praised him as the wisest Emperor in history. In addition, the neighboring countries feared him, because he had earned his title of the Bloody Emperor by purging many nobles.

There were four other men in the room besides Jircniv, but all of them stood motionless, as though they were statues.

Jircniv turned his eyes away from the papers he had been looking at for a while and fixed his line of sight in mid-air. He scribed his thoughts onto it, as though there were a blackboard there.

The news from his spy within the Empire had produced that reaction from Jircniv.

—The door opened, without any knocking.

This outrageously rude behavior made his attendants lower their stances and glare at the doorway with hostility. However, once those minions saw who had walked into the room, they immediately stood down and returned to their original stances.

The person who had entered was an old man, his long beard about half as tall as he was long. His hair was as white as snow, yet it had not thinned out.

The long years of his life were written on the wrinkles of his face, while his keen eyes concealed the light of wisdom within them.

He wore a necklace made of countless tiny crystal balls, and his withered hands were adorned with several practical, unadorned rings. His pure white robe was baggy and loose, and it was made of a very soft fabric.

His appearance was the first thing any know-nothing would think of when they heard the word “magic caster”.

Those were the first words uttered by the old man who had slowly entered the room. He spoke them in a young-sounding voice that seemed thoroughly at odds with his appearance. Jircniv merely moved his eyes, shifting the object of his interested gaze.

“I have investigated, but it is impossible for us to find him.”

“What do you mean, in simple words?’

“…Your Imperial Majesty. Magic is one of the principles of the world. Knowledge—”

“Yes, I know, I know,” Jircniv said with a disinterested wave of his hand. “You ramble on once you get going. Skip that for now and get to the point.”

“…If this Ainz Ooal Gown person truly exists, then he must surely possess some very powerful magic item or some personal power which prevents people from spying on him. In my estimation, he might be able to use magic of a similar, or higher tier than me.

Everyone in the room grew tense, with the exception of the Emperor and the old man.

The old man was saying that this person was on par with the highest-tiered magic caster in the Empire’s history, the Imperial Court Wizard, the great sage known as the “Triple Magic Caster”, Fluder Paradyne. Everyone else doubted their ears.

“I see. Is that why you look so happy, Gramps?”

“Of course. In the past 200 years, I have not seen an arcane magic caster who was as powerful or more powerful than myself.”

Driven by curiosity, the Emperor asked his question, and the Imperial Court Wizard began perusing his memory.

“Then, is there a more skilled arcane magic caster than yourself out there, Gramps?”

Fluder’s eyes wavered, as though looking into the distance.

“That is hard to say… I believe I have surpassed her by far now, but… I cannot be certain. That is because it is difficult to determine superiority in the field of magical theory.”

He slowly stroked his beard and his words were humble, though his tone overflowed with confidence. Then, he quirked up an eyebrow.

“I hope that Ainz Ooal Gown gentleman is a more outstanding person than myself.”

Jircniv smiled in satisfaction, then picked out a sheet of paper and placed it before Fluder.

Fluder seemed surprised, but he accepted the piece of paper and quickly scanned it.

That was his opinion. However, a great change came over Fluder’s sagely countenance. His eyes lit up with an ardent flame and he looked like a starving beast.

“I see, so this is why Your Imperial Majesty asked me to investigate Ainz Ooal Gown’s actions. How interesting. Two people against what appears to be dozens of the Theocracy’s special forces operatives… Kuku. I would like to sit down and discuss magical knowledge with this gentleman.”

The paper contained Gazef Stronoff’s testimony to the King, and even the recorder’s personal opinion.

“Then, Your Imperial Majesty. Have you sent anyone to this village?”

“Not yet. Sending someone over would attract attention.”

“…Perhaps one of my disciples… no, if this missive is trustworthy, it would be best to build friendly relations with him.”

“I disagree, Gramps. If he is a man of power that we can control, I would like to invite him to the Empire.”

“I believe that would be excellent. In order to plumb the abyss of magic, we need knowledgeable people from many disciplines… It would be best if I could meet someone who blazed his own trail.”

His voice was filled with desire.

Fluder wanted to gaze into the abyss of magic. Therefore, he wanted someone who had been there before to teach him.

Those behind him only needed to follow in the footsteps of their predecessors — Fluder, for the most part. They walked the best and most efficient path, using that to fully realize their potential.

However, Fluder — as a lonely pioneer — did not enjoy such good fortune. He had to feel around in the dark by himself, and much of his growth was wasted effort. If he could have saved that trouble and fully cultivated his talent, he would probably be a more potent magic caster.

Fluder understood that, which was why he desperately wanted to meet someone who could guide him. His talent was limited. He did not want to waste more of it.

Fluder had trained up disciples in the hope that someone who surpassed him would appear and guide his development. Unfortunately, his wish had not yet been granted.

That was the only thing Jircniv could not help him with. Therefore, he decided to change the topic.

“Also, I wish to learn about some adamantite-ranked adventurers who appeared in E-Rantel. Could you help me?”
“Of course, Your Imperial Majesty.”