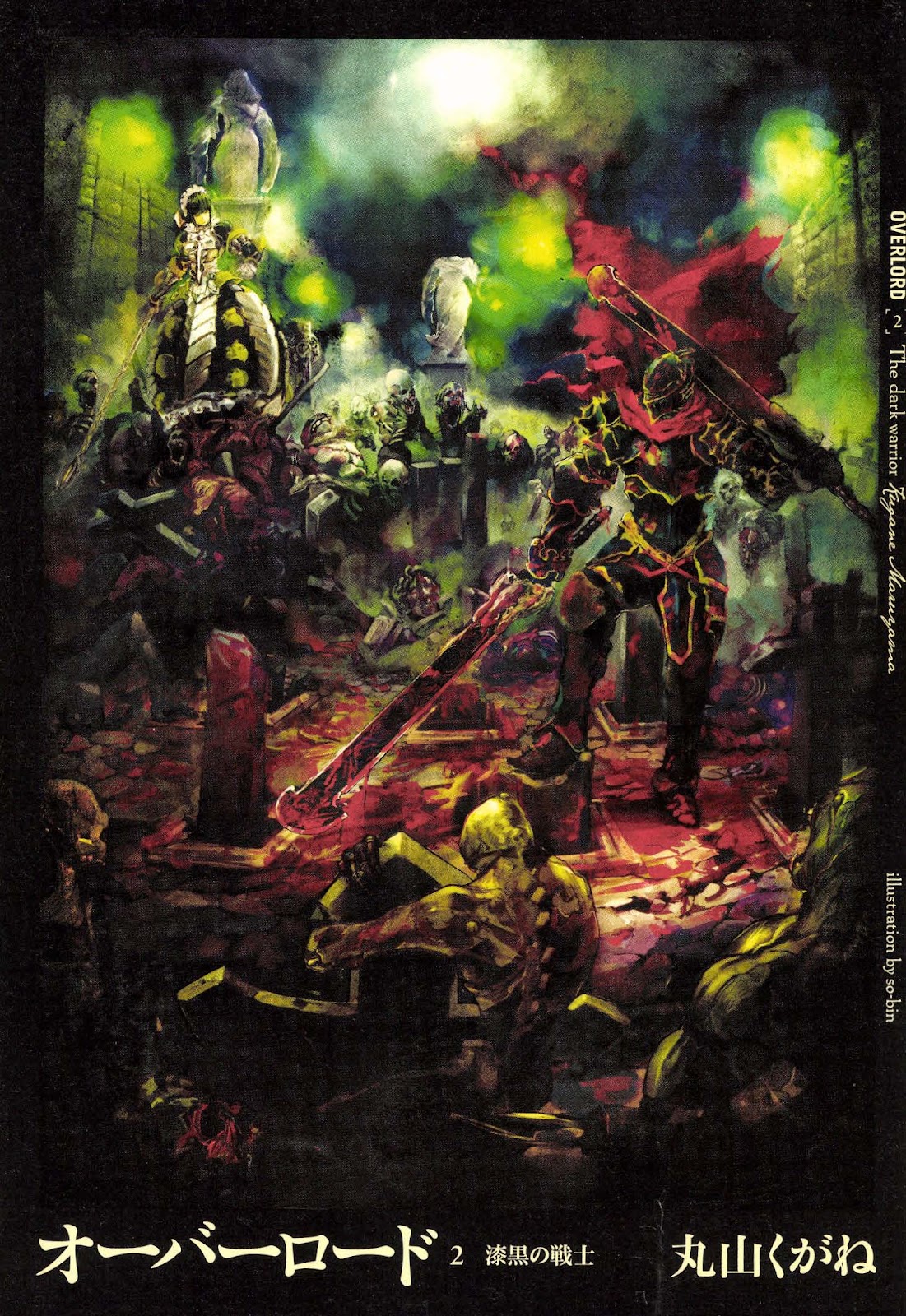 The Supreme Ruler of the Great Underground Tomb of Nazarick had a luxurious office.

Said office was filled with tasteful and exotic furniture, every single piece being of exquisite design and decoration. The crimson carpet upon the floor was thick and soft, swallowing the footsteps of those who trod upon it. Flags bearing assorted insignia hung upon the walls in the depths of the room.

An imposing mahogany desk sat in the center of the office. Its owner sat behind it, upon a black leather chair.

If one were to describe that man in one phrase — dressed as he was in a long, black robe which seemed to absorb the light — then he would have to be an “Overlord of Death.”

His exposed head was a fleshless skull. The points of crimson light within its empty eye sockets were blended with faint traces of darkness.

This was the man once known as Momonga, who had now taken on the name of the guild, Ainz Ooal Gown.

Ainz meshed his skeletal fingers together. The nine rings on those fingers glittered as they reflected the magical radiance of 「Continual Light」 spells.

“Good grief… where shall I go from here?”

YGGDRASIL was a Dive Massively Multiplayer Online Roleplaying Game, which allowed its players to immerse themselves in virtual reality and experience their adventures within the game world with their own bodies. It had been eight days since its last day of service — when Ainz had been mysteriously transferred to a new world in the form of his character from the game.

During this time, Ainz had studied the conditions and vassals of the Great Underground Tomb of Nazarick and learned about the various differences between this place and the game world. Now, he was deciding on what he should do next.

“All shall proceed as you desire,” the beautiful woman replied to Ainz’s muttering.

She was a world class beauty in a pure white dress, whose faint smile made her resemble a goddess. Her long black hair was lustrous and silky, in stark contrast with the color of her dress, and it reached down to her waist. However, she was not a human being.

Her golden pupils were vertically slit, and a pair of curling, ram-like horns protruded from both her temples. In addition, a pair of black-feathered wings grew from her hips and covered her legs.

“Is that so, Albedo? I am pleased by your loyalty.”

She was the Guardian Overseer of the Great Underground Tomb of Nazarick, Albedo. She was the Non-Player Character (NPC) who was in charge of the seven Floor Guardians.

When Ainz and his guildmates built the Great Underground Tomb of Nazarick in the past, Albedo had been created as to work for them as an underling. However, she was now sentient and had pledged her undying loyalty to Ainz.

While this situation pleased Ainz, on the flip side of things, he had only been a lowly salaryman in his previous life, and so all this placed a great deal of stress on him, be it from having to act like a proper master in front of his subordinates or running Nazarick smoothly as its ruler.

The biggest problem was the sheer lack of information about this new world he currently inhabited.

“…Then, how about the next report?”

Ainz accepted the document from Albedo and immediately began scanning through it. The circular characters had been written with a fountain pen.

This particular report came from Aura Bella Fiora, Guardian of the Sixth Floor.

It stated that they had not yet made contact with YGGDRASIL players like Ainz, nor had they found any trace of them. She had done a search of the forest near the Great Underground Tomb, and she had found a lake among the foothills of the mountain range at the end of the forest.

Ainz nodded. Relief flooded through him as he learned that they had not found the beings in this world of which he was most wary — other players.

“I understand. Tell Aura and her people to continue carrying out my orders.”

A quiet knocking came from the door. Albedo glanced at Ainz’s expression, then bowed deeply and headed to the door. After verifying the identity of the visitor, Albedo replied:

“Shalltear? That’s fine, let her in.”

After receiving Ainz’s permission to enter, a girl of around fourteen years of age elegantly entered the office.

She wore a black ballroom gown with a bell-like skirt. Her skin was as pale as wax, and her perfectly proportioned face was that of a world class beauty. Her long silver hair swayed as she walked, and her ample bosom — which did not match her age — wobbled mightily with every step that she took.

She was the Guardian of the First to Third Floors, the “True Ancestor,” Shalltear Bloodfallen.

“The same to you, Shalltear. Why have you come to my room today?”

“Naturally, it was to admire your handsome features, Ainz-sama.”

While there was obviously no expression on Ainz’s skeletal face, the crimson points of light in his eye sockets flared brightly.

At first, he wanted to tell her to dispense with the pleasantries, but Ainz swallowed those words. However, he could see the smile on Albedo’s face twisting as she looked upon Shalltear’s crimson eyes, whose pupils were slowly filling with arousal.

It was still a smile, and her beauty was not diminished in the slightest, but it was no longer a pleasant expression.

Rather, it resembled the grinning of a demon.

Still, Ainz quietly breathed a sigh of relief, because Albedo was staring at Shalltear, and not himself.

“Then, seeing as you have looked your fill, you may leave, Shalltear. Ainz-sama and I are currently deciding the future of the Great Underground Tomb of Nazarick. Would you mind not interfering with our important work?”

“…It is basic courtesy to greet someone politely before launching into the main issue… aged old hags are so annoying. Could it be they’re desperate because they’re past their expiry date?”

“…Don’t you think that food without an expiry date because it’s stuffed full of preservatives is the same as poison? Expired food would be safer compared to that, don’t you think?”

“…I’d advise you not to look down on food poisoning. You might get an infection.”

“…The important thing is whether it can be eaten, right? Compared to what looks like a large display of food, but the truth is… well, you know what I mean, right?”

The looks on the feuding belles before Ainz could chill a hundred million year old love.

Ainz decided to speak up before the two of them could no longer hold their impulses back and started ripping into each other.

“That’s enough playing around, you two.”

Their faces blossomed into beaming smiles as they heard his command. Their previous expressions were gone, and now they were but two innocent, adorable girls.

Women are really scary… no, it’s just these two who are especially scary…

After becoming undead, any strong emotions Ainz experienced were immediately suppressed. Even so, he felt that the speed at which they had changed their expression was quite frightening.

The two of them were at each other’s throats because they were rivals in love.

Albedo and Shalltear were both infatuated with Ainz. Any man who was unhappy with receiving the affections of two such gorgeous women was no man at all.

However, Ainz could not bring himself to accept their feelings just like that.

The main reason was because the necrophiliac Shalltear had once whispered sweetly into his ear, “This beautiful bone structure must have come from the hands of a divine Creator.”

To Shalltear, these words might have been a mumbled expression of love — or perhaps they were praise — but they were a great shock to Ainz. After all, this was the first time in his life that he had been complimented on his looks — but it was as a skeleton. It had been several days since then, but he was still shaken.

Ainz shook his head to banish those meaningless memories and replied:

“I ask you once more, Shalltear. Do you have anything else for me?”

“Yes. I will be meeting Sebas afterwards in order to fulfill the task set to me. Since I may not be able to return to Nazarick for some time, I came to bid farewell to you before I left.”

Ainz remembered that he had given her such a task, and nodded.

“I see. Then, Shalltear, take care when accomplishing your task and return home safely.”

“Yes!” she replied in a bright and clear voice.

“Then, you may leave, Shalltear. Also, as you go, tell Narberal or Entoma to send Demiurge over. Tell him I need to discuss contingency plans with him.”