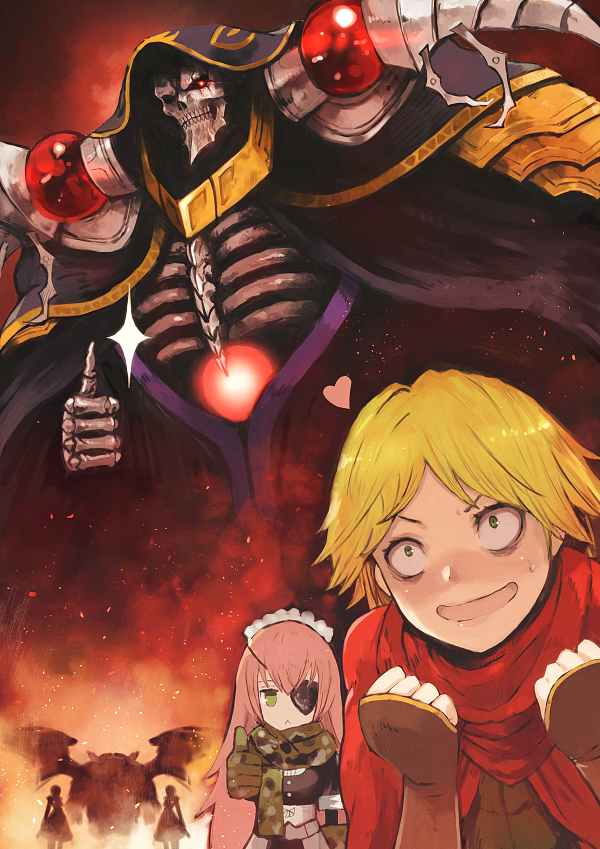 Thank you for your hard work, dear readers who have made it all the way
here. The hand you held the book with must be feeling heavy, no?
I’m sure you must all have felt the fear of dropping a book on your face
when reading while lying down.
Volume 13 is the first Overlord book in history with a pagecount well in
excess of 500. What did you think of the contents? I would be happy
if even a small portion of the readers felt it was interesting.
However, in truth, it might have been better to split it up into a second and
third part instead. Reading the whole thing from start to finish
really taxes the brains. Reading chapters 4, 5 and then the
intermission before going to sleep might be a better pace. How did
you read it, everyone? Ah, a major advantage of dividing it into two
books would be the opportunity to enjoy more of so bin-san’s lovely
illustrations!
Still, this won’t happen again, so there’s no point thinking about it.
While I kept saying I want to cut the page count, the length of this book
ended up being really rough. As page count increases, all the
associated work takes more time too, and the schedule keeps slipping.
The probability of wrong words also increases, so it seems like there
are pretty much no upsides to it.
Next time, I’d like to write a book that’s easier on both the author
and the audience.
Now then, while I did say the next volume is in 2019, I’m planning to
write something very long before that, so I don’t know how things
will actually turn out. Relaxing and waiting helps a lot. The third
season of the anime will also come out during that time, so I hope
you’ll all enjoy it.
But in truth, I’ve pretty much run out of things to put into the
afterword. In the past, when I was a reader and saw the author say he
didn’t know what to write, I would think “just write whatever you
want”. Now that I’m in the same situation, I can understand what
they had to deal with. What would you all write if you were in my
position? Honestly… the idea that I don’t need to write these
afterwords any more is starting to grow on me!
Now then, I’d like to thank everyone who helped me with this volume. I
look forward to working with you in future.
2018
April Maruyama Kugane
Character
Sheets 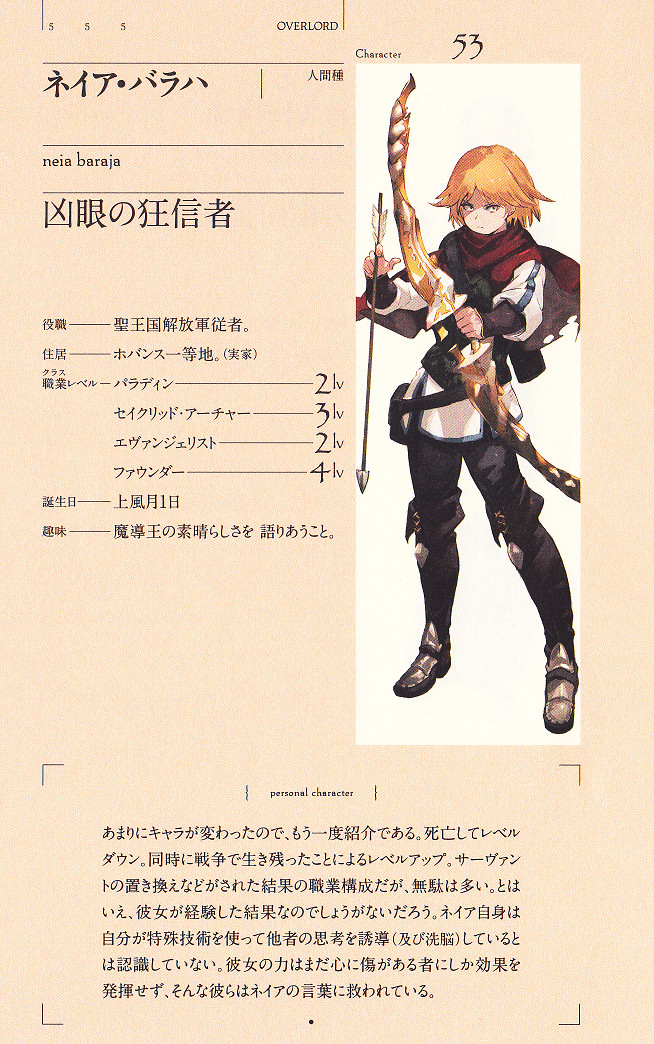 Neia
Baraja
Vicious-eyed
Fanatic
Vocation:
Squire of the Holy Kingdom Liberation Army
Residence:
Prime estate in Hoburns (her family home)
Class
levels:
Paladin
– 2 lv
Sacred
Archer 3 lv
Evangelist
2 lv
Founder
4 lv
Birthday:
1st day of the Upper Wind Month
Interests:
Telling everyone about how wonderful the Sorcerer King is
Since her character has changed radically, she will be re-introduced. She
lost levels from dying, but at the same time she gained levels from
surviving the war. Her current character build is the result of
losing levels in Servant. She has many incompatible class levels, but
given her experiences, this was the only way she could have turned
out, no? Neia has not yet realised that she is using a special
ability to guide the thoughts of others (AKA brainwashing).
Currently, her ability only works on people with emotional trauma,
but Neia’s words can save them. 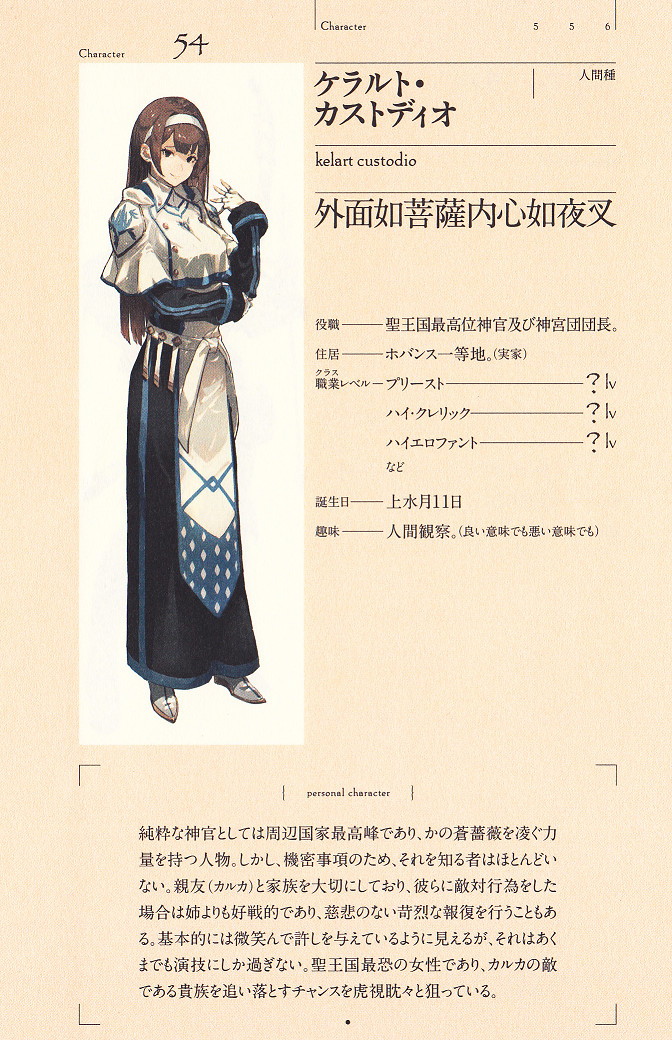 Kelart
Custodio
Face
of an angel, heart of a demon
Vocation:
Highest-ranked priestess in the Holy Kingdom and the head of the
priest corps.
Residence:
Prime estate in Hoburns (her family home)
Class
levels:
Priest
– ?lv
High
Priest – ? lv
Hierophant
– ? lv
etc.
Birthday:
11th day of the Upper Water Month
Interests:
Observing people (both the good and bad implications)
In terms of pure divine spellcasting ability, she is the most powerful
in the region, surpassing even Blue Rose in that respect. However,
this is a national secret, so almost nobody knows about it. She
cherishes her family and her best friend (Calca), and she is more
aggressive towards people hostile to them than her sister, and she
even enacts ruthless, cruel revenge on them at times. She is almost
always seen with a smile on her face, but that is little more than a
facade. She is always looking for a chance to bring down the nobles
who are Calca’s enemies, and one can call her the most frightening
woman in the Holy Kingdom. 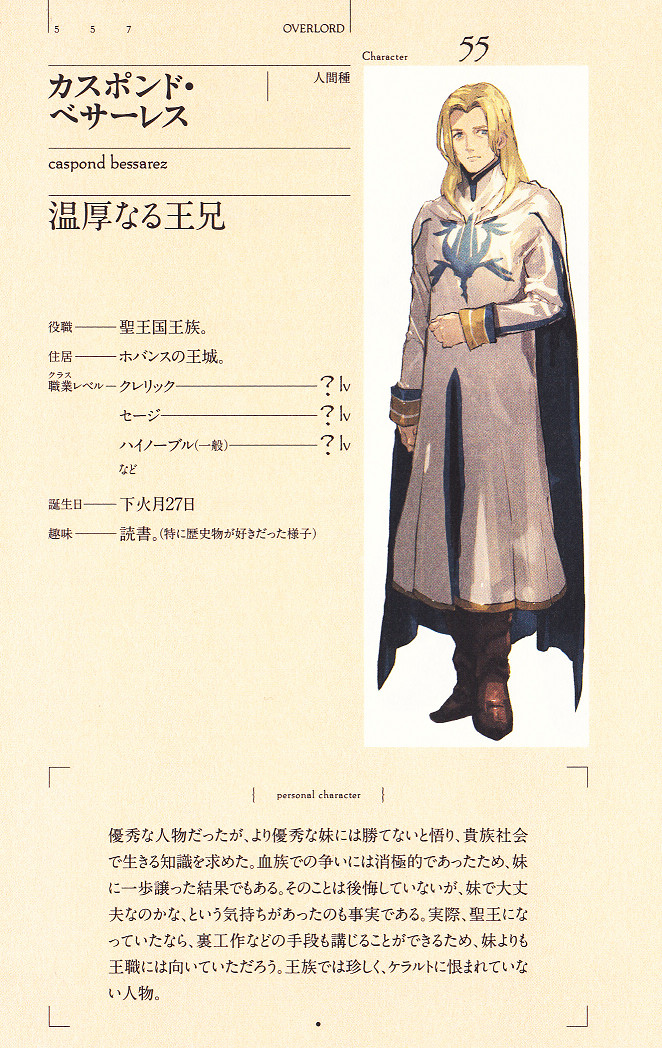 Caspond
Bessarez
The
kind prince
Vocation:
Royalty of the Holy Kingdom
Residence:
Hoburns Royal Palace
Class
levels:
Cleric
– ?lv
Sage
– ? lv
High
Noble (normal) – ? lv
etc.
Birthday:
27th day of the Lower Fire Month
Interests:
Reading (he seems to like history in particular)
Caspon
is an excellent individual, and after realising he could not surpass
his even more outstanding sister, he equipped himself with the
knowledge to survive in noble society. He had no interest in
conflicts over the bloodline, so he ended up yielding his birthright
to his little sister. While he does not regret that decision, whether
or not he truly accepts his sister’s actions remains in question.
In truth, if he had become the Holy King, he would have been better
suited to the throne thanks to his willingness to perform underhanded
actions. He is is one of the rare few members of the royal family
that Kelart does not hate. 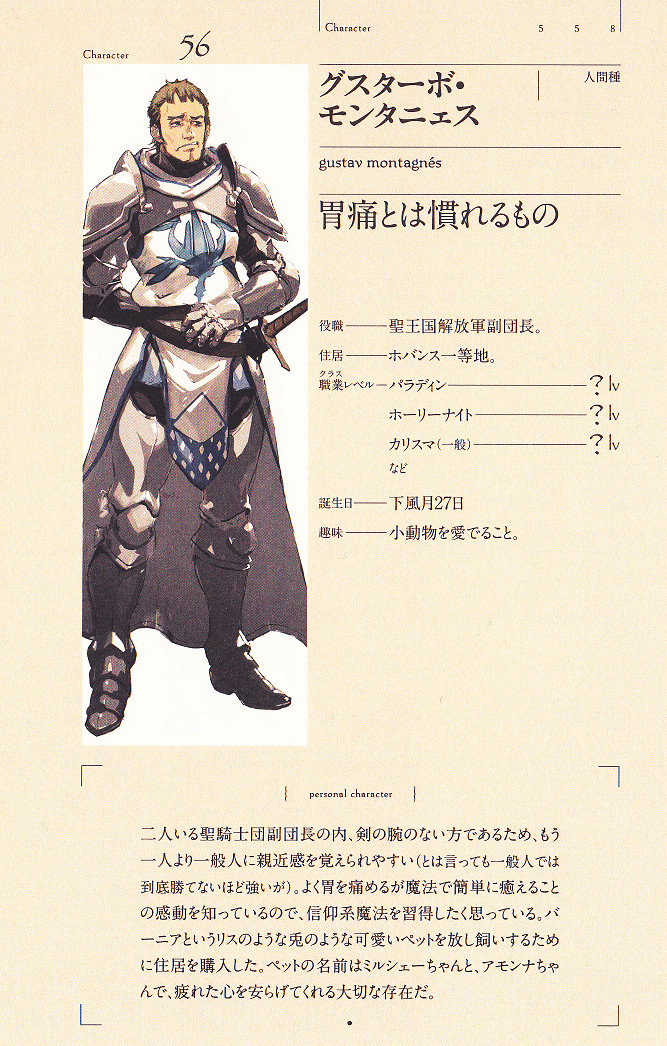 Gustav
Montagnes
Stomach
pains are just something you get used to
Vocation:
Deputy commander of the Holy Kingdom Liberation Army
Residence:
Prime estate in Hoburns
Class
levels:
Paladin
– ?lv
Holy
Knight – ? lv
Charisma
(normal) – ? lv
etc.
Birthday:
27th day of the Lower Wind Month
Interests:
He likes small animals
Of the two vice-captains of the paladin corps, his sword skills are
inferior, and as a result he is closer to the common man than the
other one (though he’s still strong enough that an ordinary person
could never defeat him). He gets stomach pains often, but he is very
grateful for the fact that magic can cure that easily, so he is
thinking of learning divine magic. He bought a house so that he could
let his pet Bunnias — which are rabbits that look like squirrels —
run free. His pets’ names are Milshe-chan and Amonna-chan, and they
are important beings that soothe his weary soul. 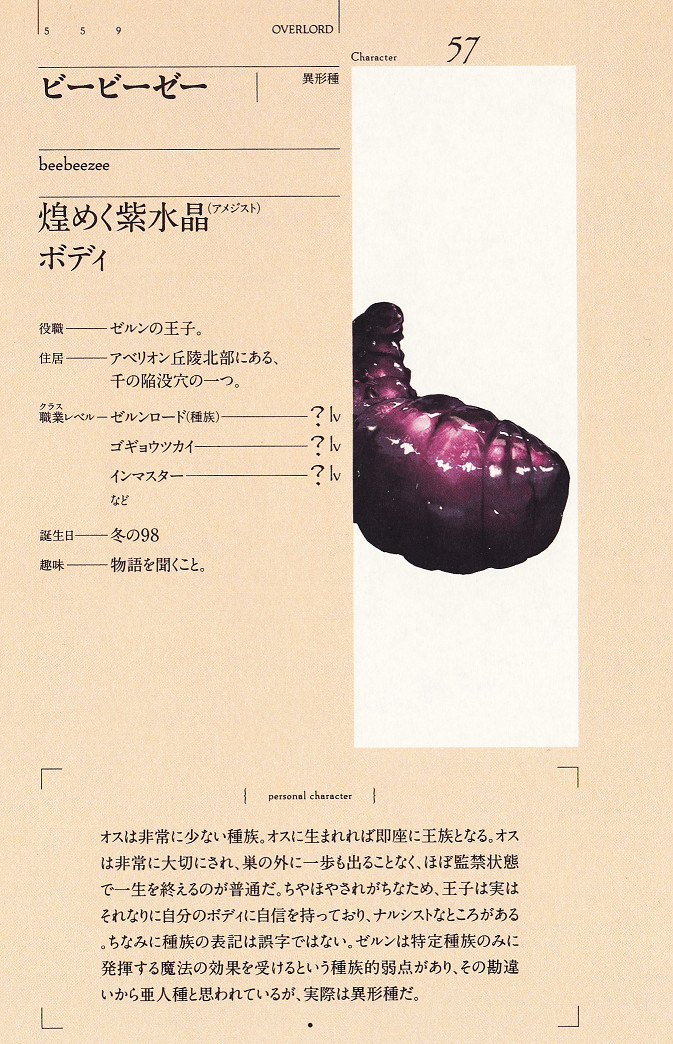 Beebeezee
(Type:
heteromorph)
Sparkling
Amethyst Body
Vocation:
Prince of the Zern
Residence:
One of the thousand sinkholes in the northern Abelion Hills
Class
levels:
Zern
Lord (racial) – ? Lv
Gogyoutsukai
(Five Elements User) – ? Lv
Yin
Master – ? lv
etc.
Birthday:
98th of Winter
Interests:
Listening to stories.
His race has very few males. Therefore, any males who are born are
immediately elevated to royalty. Due to their great importance, they
are not allowed outside their nests, and it is quite normal for them
to spend their lives in a state of house arrest. Thanks to being
praised constantly by the masses, he has developed great confidence
in his body, to the point of narcissism. Incidentally, his species
type is not an error. The Zern have a racial weakness wherein they
are affected by spells that are only effective against specific
races, hence their mis-classification as demihumans. They are
actually heteromorphs. 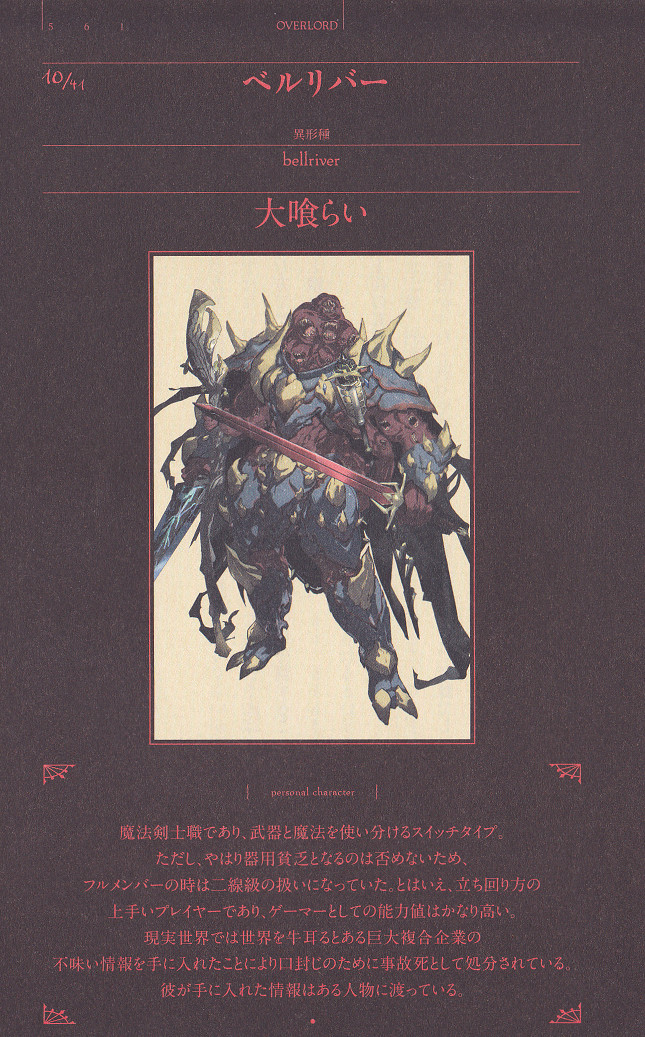 Bellriver
Big
Eater
As
a magic swordsman, he was the type who switched between swords and
spells. However, he was a jack of all trades but a master of none, so
during the guild’s glory days, he was often a second-choice pick as
a party member. That said, he was good in a fight, and his ability as
a gamer was quite high. In the real world, he learned some ominous
information about the megacorporations which ruled the world and was
killed in an accident to seal his lips. The information he possessed
made its way into the hands of a certain someone.
Credits
Volume
13 could not have been translated into English without the help of
the tremendously industrious workers on Baidu, who sacrificed their
time, sleep and health to turn 552 pages of Maruyama’s prose into
Chinese, which I could process much faster. Without further ado,
these are the people who made it possible. 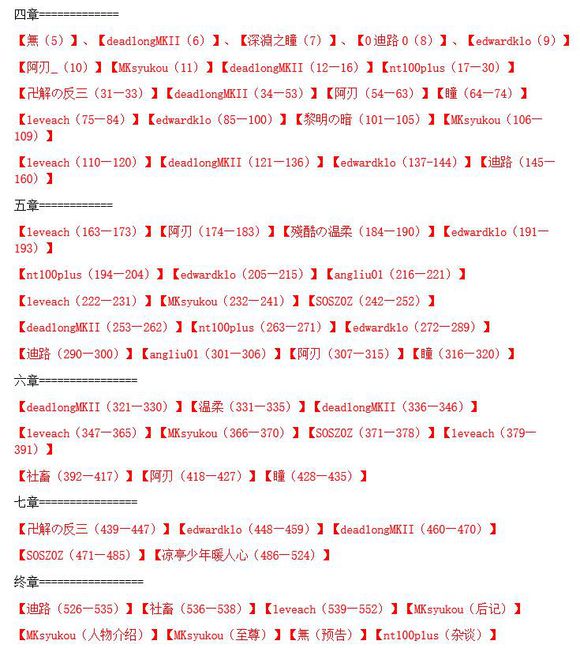