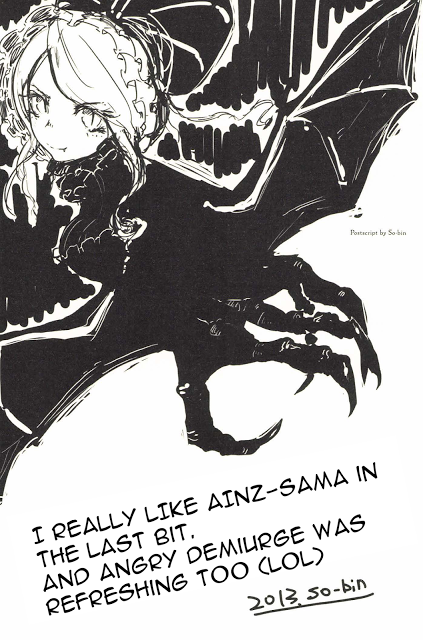 It’s been about four months since the previous volume, and I’m glad I could speak with everyone again. I am the author, Maruyama Kugane.

How did everyone find “Overlord 3 – The Bloody Valkyrie?” I would be glad if you enjoyed it.

Still, how shall I continue writing from now on? That same question comes up every time. My experiences are largely limited to the company and my home, so I’m not confident of writing anything interesting. Thus, I shall disclose my schedule for the past four months.

First, I spent about a month writing the manuscript, then handed it to the editor-sama for checking. Then the corrected manuscript came back to me for further changes. This process took about a month to complete.

The manuscript then went to Proofreader-san, who bullies me~ But after his feedback and my corrections to the manuscript, which last about one and a half months, the work is finally complete.

In this way, it took a total of about three months or so to write “The Bloody Valkyrie”.

There’s about a month of free time between the completion of the manuscript and publishing. I divide this time by four and spent it updating the WN version every month.

My work at my company is very relaxed, so I can come home early. I could actually force myself to proofread too, but people who need to come back late every night end up sleeping less, so they won’t even get that month of free time. It’s rough for them.

…Although, how on earth do those authors put out a new book every three months? Someone, please teach me how they do it.

Then, I shall express my thanks next.

Thank you very much to so-bin-sama, the people of Chord Design Studio, Ohaku-sama, and F-da-sama. Without your support, this work would not have been possible.

Honey, thanks for your feedback. I changed it immediately.

And also, to all those of you who bought this book, thank you very much. If you have any opinions or feedback, you can use a postcard (you’ll need to pay postage yourself, sorry about that), or you can just write on the website if you’re a WN reader. I will be very grateful.

After that, the next volume… it’ll be solely focused on the Lizardmen. Nothing would delight me more than to receive your continued support! 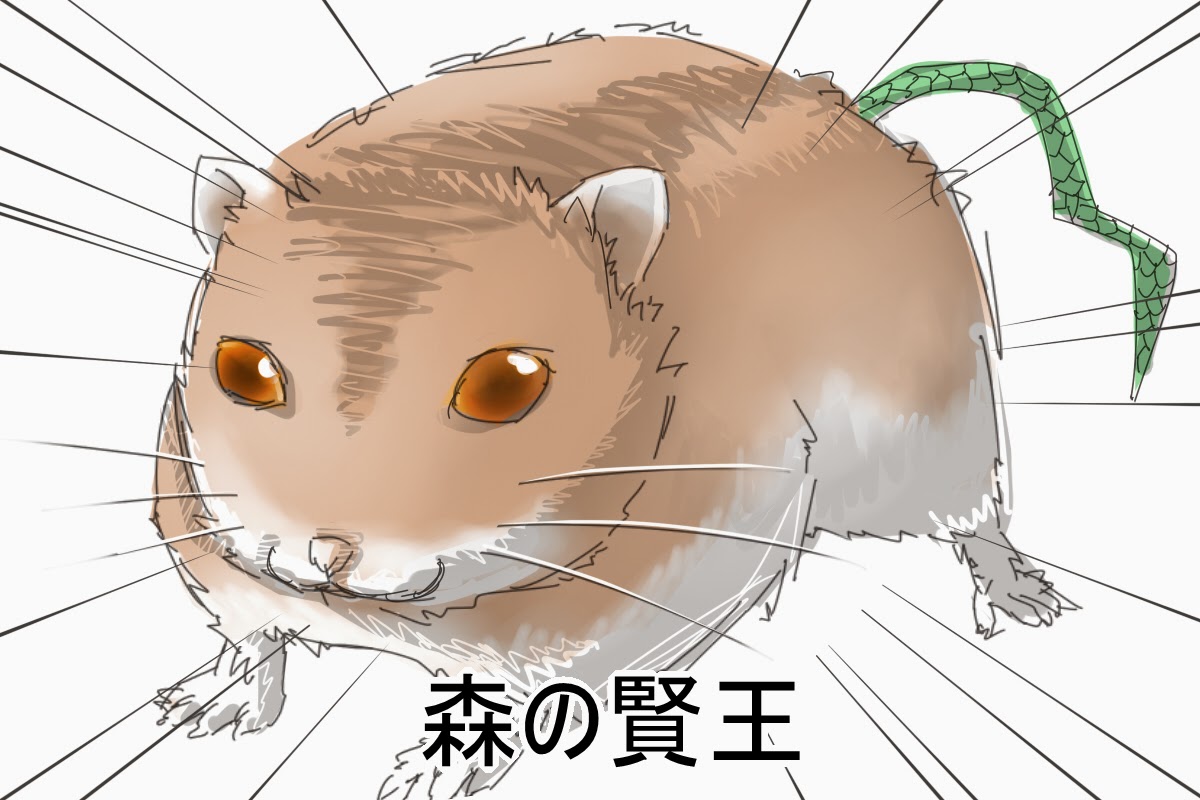 Perote, the leader of the mithril ranked adventurer team “Tenrou,” opened the doors to the Adventurer’s Guild.

The adventurers there looked at him with admiring eyes.

Perote was used to this sort of thing. However, the reception seemed more subdued that it had been a month ago.

Well, it can’t be helped.

He turned his eyes to the noticeboard. Regretfully, there were almost no mithril ranked requests.

Perote sounded like he was complaining when he said that name.

About a month ago, that man had slain a powerful Vampire.

He had not personally witnessed that intense battle, but one could imagine what had happened after seeing the remains of that battlefield. Thus, he had not been surprised to learn that Kralgra — an adventurer team of the same rank as Perote’s own — had been annihilated in the crossfire.

No, anyone who joined that battle would have been killed for certain.

The exploding magic crystal had scorched the land black, and it had even reduced some places to a desert. The startling thing was that it had to be done to defeat that Vampire. And then—

Not only had they survived, but they had seized victory. It was only natural for Perote to consider these people — who had returned safely from a battle with a Vampire, a monster that Perote himself could not defeat — to be even greater monsters.

The change in his tone from just now was because Momon was powerful enough to compel respect from him.

Just as he was fantasizing about that sort of absolute might, he heard the sound of the door opening. A wave of commotion swept through the guild like a gust of wind.

Perote vaguely understood the reason for that disturbance, and turned his eyes in the same reaction as everyone was looking. There, he saw the person he had been expecting.

It was the talk of the town, the “Dark Hero,” Momon.

He had two greatswords on his back, and a beautiful girl behind him.

“There’s a lot of adamantite on the front of his armor… how much did it cost, anyway?”

The nickname of “Dark Hero” came from that suit of incredibly high-end full plate armor, which had been heavily damaged when he came back from that battlefield. Back then, there had been scorch and claw marks everywhere, but now that suit of armor was pristine. It glittered brightly under the rays of the sun.

This was the result of the combined efforts of every magic caster in the Magician’s Guild coming together to repair it.

At his neck hung a metal plate — one that belonged to a living legend, an object of worship for adventurers, the trump card of humanity that would protect them from being ravaged by the powerful races of the world — an adamantite plate.

His accomplishments had long surpassed those of the orichalcum rank, and there had never been one of those in E-Rantel before.

And now, this individual, famed in song and story, had appeared before them, stirring the Adventurer’s Guild into a frenzy.

“That must be… the ‘Dark Hero’ Momon, right? …And behind him is the ‘Beautiful Princess,’ Nabe. The rumors were right about her looks…”

“You know, they say he was responsible for burning down that swath of forest… apparently, he did it with some kind of martial art…”

“No way, how could that be… if he could use martial arts to burn it down, wouldn’t that mean he’s no longer human?”

“He should be one of the few people who could do it, right? Adamantite ranked adventurers are those who define the peak of power. I wouldn’t be surprised if people called him the adamantite rank of adamantite ranks.”

Momon advanced calmly to the counter under these adoring looks. The adventurers chatting with the guild receptionists all made way for the most highly-placed of adventurers, and on their faces was respect — and fear.

“Our assignment is complete. Please help us keep an eye out for any new jobs.”

The guild receptionist’s eyes went wide, but they returned to their normal shape immediately. Perote knew why her eyes had widened. The task Momon had accepted was one which even mithril ranked adventurers would have trouble accomplishing, and which would need quite a while to complete. However, Momon and his partner had cleared it with ease.

Indeed, he could clear even mithril ranked missions with ease.

This was only to be expected, because such were the talents of the most highly-ranked adventurers.

“There’s no work left for us.”

Perote let that grumble slip, but of course, he did not actually mean it. Anyone who could reach the mithril rank would have made enough money to retire and live in luxury for the rest of their lives. Thus, anyone who continued adventuring after this must have had a reason for that beyond money.

The receptionist rose to her feet and bowed deeply to him.

Momon seemed about to say something else, but then he froze halfway. Several seconds later, he spoke again:

“—I see. That’s good, because I just remembered something I had to do. I’ll be returning to the inn; if there’s anything, look for me there. Do you know where I’m staying?”

“I do. Is it the Shining Gold Pavilion?”

Ainz nodded, then flourished his crimson cape as he turned and walked away.

Perote had heard the sound of Momon speaking from his side, but because his voice was too soft, Perote could not make out the details.

What Perote had failed to hear was Ainz’s order to his distant subordinates to demonstrate their matchless military might.
“Order Gargantua to move out, and summon Victim as well. Once Cocytus returns, we will bear witness to a rare event — all the Floor Guardians will move out as one.”